So, I made a model consisted of negative poisson's ratio structure (Auxetic) core made up of alumnium shell. The structure is sandwiched between two steel plates. The auxetic core is modeled using mat 024 piecewise_linear_plasticity, while the plates modeled using mat 107 modified johnson cook. The sandwich is given blast load using load_blast_enhanced. Then when the D3plot file is opened using PrePost, only the core appeared. The two plates is listed on the corner top right, but not visible. Also, when the BLSTFOR file is opened, it shows the upper plate deforming. But, instead of perforated, it stretched abnormally.

In summary I have two problems, first the D3Plot, second is modified johnson cook material modelling. 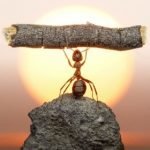 You will need to change the .k file to .txt before attaching. Sorry for any inconvenience. Regarding your d3plot issue, you could try to download a different version of PrePost. What version are you using? I'm using v4.7.20 which is currently working well. It could be an issue with your model though which would be a little strange, but we can cross that bridge if the PrePost version doesn't fix anything.

Regarding your second question, I'm not sure what you are describing. What would you expect to happen with the johnson cook material and what is happening?